Mona Morssy is making noise. And she wants you to join in. 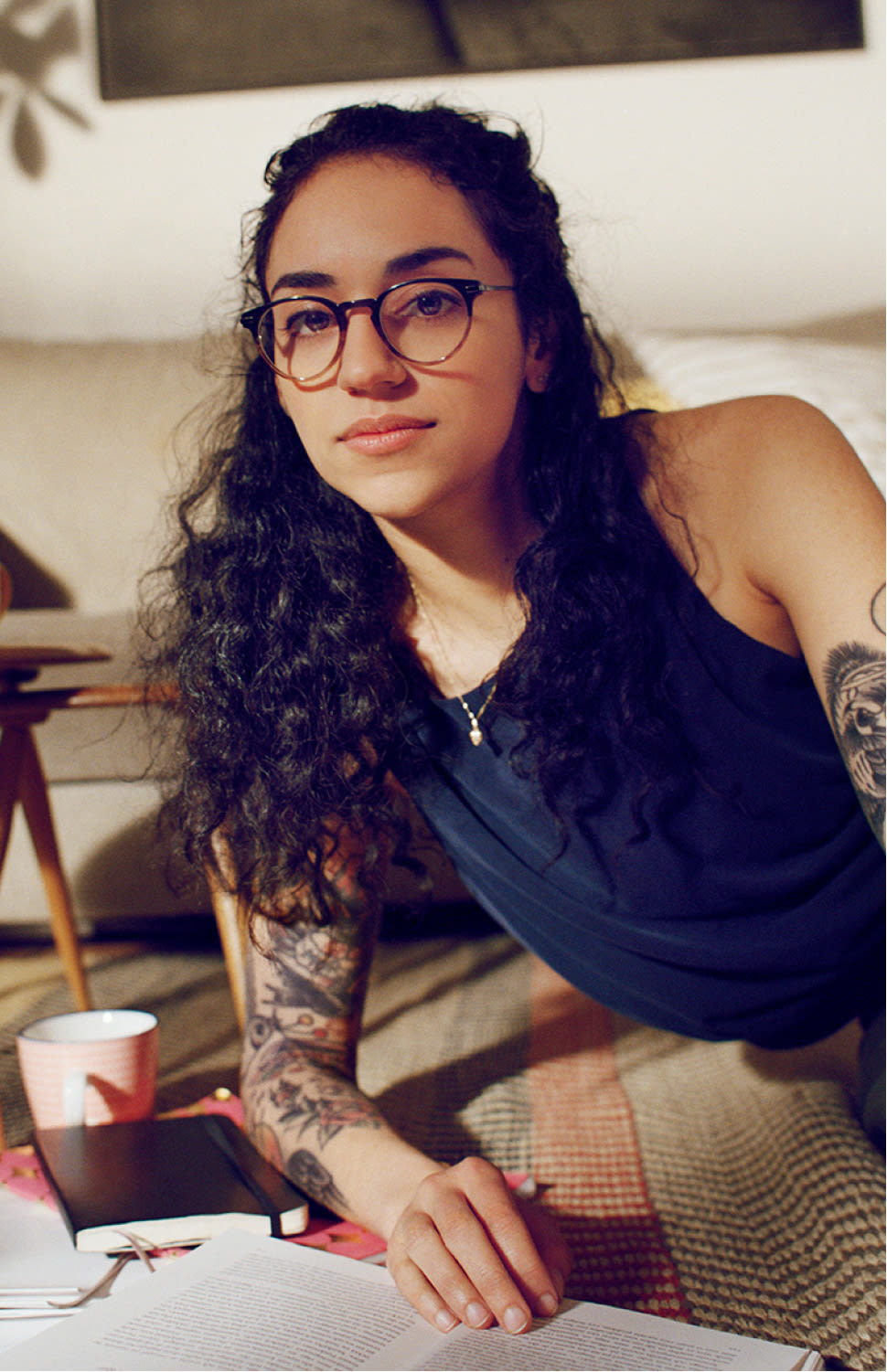 The 27-year-old social worker also fronts Malmö’s most talked about new hardcore band, Vile Act. We talked to her about starting conversations, making herself heard, and the intersection between her work and her music.

Mona is calling from Malmö. The day is dipping into evening and she has just returned from a “very ridiculous” day at work, so laughingly requests we forgo the video-call in favour of audio this evening. The city – the second largest in Sweden behind its capital – has been her home for the past three years. Having moved there for the people and the punk scene, she’s stayed for its size and its attitude: big enough to be interesting but small enough to navigate. “I had no interest in going anywhere else.”

Her band, Vile Act, are an amalgamation of Swedish hardcore legends born from her friendship with bassist Kalle Hallqvist who also plays in Hårda Tider. Having floated the idea of starting a group for months, they finally reached out to Magnus Blixtberg (guitarist for punk rock outfit Satanic Surfers) and drummer Linus Möre (also a member of the bands Hag and Overdose respectively). The unit immediately clicked and recorded a 7-track demo: a collection of tracks as sonically intense as they are politically charged. Yet it’s her work as a social worker, finding solutions to the problems faced by some of Sweden’s most vulnerable that have seen her transform people’s lives the most. For her, these two dimensions of herself are one in the same: both channels for motivating change and starting a conversation. For her, it’s always been about people, just as it’s always been about hardcore.

Mona recalls being picked on from a young age, something she puts down to being a “nerd” – the eight-year-old more interested in picking a stack of books than going out to play. Drifting away from her peers meant she mostly found herself alone, at home or in the library, in front of a computer. It was online that her music taste started to expand. An early-teenage interest in metal set her on a quest for something heavier, and around the age of 16, she discovered hardcore. “It definitely clicked,” she remembers. “I’d finally found something I could do without compromising who I was in school. I had something else to turn to.”

The music became a social life. Mona was drawn to other kids her age who were interested in heavier music. She started playing drums and guitar in an all-girl indie band. Searching online she found listings for shows which she went to, often completely alone. She remembers the overwhelming intimidation of her first hardcore show, aged 16. Not knowing anyone, not knowing how to act. “It was scary but I fell for it straight away,” she laughs. “I didn’t know a soul, and I still ended up stage-diving.”

Mona’s mother was less keen. Hailing from Morocco she came to Sweden with Mona’s Egyptian father in the 1980s and had slightly more traditional priorities for her daughter. “For her it was weird to see a girl getting into jumping around at shows, coming home with bruises” Mona recalls. “We’d have fights when I said I was going to another show, even though I’d just been to one. It was a protective thing.” That said, Mona is keen to add it’s a disagreement that’s long been put to bed. “She doesn’t care at this stage.”

As her tastes became harder, faster and heavier she never lost the intellectual curiosity that had powered her through school. “This is probably going to sound super corny, but I was always curious about the human condition,” she explains, prickling with self-consciousness. “Why things are the way they are.”

Originally this had manifested as an interest in brains – a fascination with, quite literally, how people work. When it came to leaving school Mona applied for a neuroscience degree at Cardiff University and spent three years there. While she found the work interesting, she became frustrated that the focus was lab-based, offering very little opportunity to apply that knowledge to real people. “By the time I’d finished my degree I was in my twenties and was starting to look at politics in terms of ideologies and social structures,” she recalls. “The medical stuff is only one part of it. What about all the ways society damages us or betters us?” Soon her path became clear, and Mona moved back to Sweden to become a social worker.

“For my mother, it was weird to see a girl getting into jumping around at shows, coming home with bruises”

Sweden has a uniquely far-reaching welfare system. The government provides universal social care to all of its citizens through decentralised agencies, and is generally considered one of the most comprehensive systems in terms of coverage, in the world. Mona works now in Malmö, specialising in addiction and substance abuse. In part she works with the healthcare system, investigating cases that are brought to her and advising on what treatment people should get, but most of her time is spent providing solutions herself. She meets clients and works with them one on one, providing them with the tools to work through an addiction and rebuild their lives.

Mona sees her role as a link. Offering a point of communication for people whose lives have been affected by a complex web of problems. “Abuse and addiction problems usually come with family problems, psychological problems, poor mental health, and homelessness,” she unpacks. And as she has found, getting to know people enough to help them properly isn’t without its challenges. Mona explains she finds herself completely involved in the lives of the people she is helping. “Some of the stories I’ve heard are really heavy, and it can be really hard to process if you can’t let go of that when you get home.”

Exposing the faults in the system

The biggest obstacles she faces however, come not from her clients but from within the system. “One challenge has been how rigid the psychiatric system is with people who have a history of drug abuse,” she relays, with audible frustration. “They need someone to be completely sober before they can start a treatment, which makes sense from a psychiatric perspective, the problem is most of these people continue their abuse because of psychiatric problems. So it’s nigh-on impossible for them to become drug free without that help, but they need to become drug free to get that help.”

Despite the scope of Sweden’s welfare system, it’s a place as vulnerable to the same social structures and toxic attitudes as anywhere. Much of Mona’s work is with immigrants new to the country, and she sees first hand the part racism plays in them trying to find employment or taking simple, practical steps like learning to drive. “They definitely have a harder time finding jobs, definitely get treated harsher by the police, and definitely don’t get the same help as quick,” she explains. “That’s the stuff that can make them relapse, because the wait is so much longer for something good.”

It’s when our conversation turns to the limitations of the system, that the relationship between Mona’s work and her music becomes clear. With Vile Act, Mona has fresh lungs with which to rip open the fault-lines the run through Swedish society; fault-lines her work forces her to navigate every day. “Everyone who knows me in the hardcore scene knows what I stand for,” she adds confidently. “I talk about these things on stage, it goes down and if people have questions about it they usually ask, or I invite them to.”

Take the final track on the band’s first demo, “Patriot”, which launches straight into a dizzying assault on the small-mindedness of nationalism in the face of the world’s crises. “This is not what we stand for, ‘Du gamla du fria’, you locked the door,” Mona screams, with scathing reference to the Swedish national anthem. Given the band’s various commitments, they don’t get to play live as much as they’d like to, but Mona maintains performance is huge part of who Vile Act are. “That, and we just really enjoy writing music that feels like you’re getting punched in the face,” she laughs.

Raising your voice for change

Politics is nothing new to hardcore. Mona herself acknowledges the genre as a response to the passivity of punk, which was rebellious but self-interested, with little time for affecting real societal change. Ever since, bands have been screaming about the system but also trying to change, and the scene – whether in Europe or America – has been closely followed animal rights, political activism and social justice.

It’s the drive against passivity that rings most true for Mona. She wants her lyrics, and her work, to spark the conversations that force people to engage with the world around them. “I totally understand people are just trying to survive,” she concedes. “And that’s fine because we don’t all have the power or circumstances to actually do something huge, and we shouldn’t have to. Yet at the same time, there are so many structures that don’t give people the choice to do anything but what they’re doing. I think if you are made to be aware of them, and then you don’t take a stand, you say you don’t have an opinion, then you’re part of upholding that structure.”

Mona pauses for a moment, before clearing her throat: “You being aware of the oppression but not speaking up about it, not touching on it, that’s where we go wrong.”