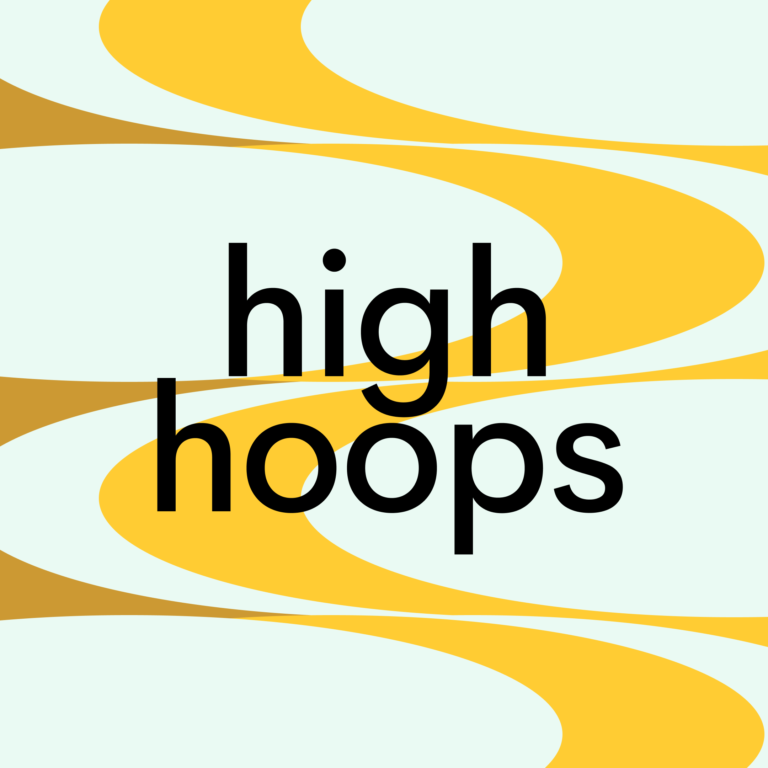 Whilst moving from London to Manchester, and throwing their 4-year anniversary party, our friends, promoters and DJs, High Hoops, still managed to kindly squeeze out this mix for us. And judging by how fantastic it is, they seem to really thrive under pressure. Strap in and get ready for a great, light-hearted selection, which includes some breakbeat, a bit of Middle Eastern delight and even some cumbia.

This isn’t the first time we’ve joined forces with the duo: you might recall when we featured them in a Manchester-focused story for our journal, in which they talked about clubbing culture and inclusivity — you can dig into that here, or keep scrolling for our latest Q&A. Happy digging.

Can you give us a brief introduction about yourselves?

We are High Hoops aka Marcos & Robbie and we run a regular, all inclusive party in Manchester and across the UK. We started throwing events in 2015 after being into the underground dance scene for a number of years and wanting to start something of our own, which incorporated our drive to making events more inclusive. As two gay men, it's super important to us that we continue to recognise and celebrate the queer history of the scene, whilst also making our parties as welcoming as possible for all. Since we started, we've had the opportunity to play in so many cool spaces and we have had the chance to host some of the most inspiring artists from around the world in the UK.

In what setting was this mix recorded, and what vibe were you aiming for?

With both of us living in different cities it is always been a bit of a challenge to get our tracks in order, but we have been selecting some of our favourite non-club tracks over the past few months and sharing them with each other, and trying to go over them whenever we have been in the same city. The vibe is pretty varied - from French pop to Afrobeat to Turkish electronica.

What was the last track or DJ set that really blew you away and what was it that made it so special?

Marcos: The last set that really blew me away was when David Vunk played with us at the White Hotel. He is such an incredible DJ and a true gentleman. His talent behind the decks is something that is hard to come across, he has a raw talent for being able to surprise the dance floor with those Italo-tinged bangers! The last track that blew me away was by Means&3rd, a friend and staple resident at High Hoops. It's called First Bounce and hasn't been released yet, but the quality and detail of this production is something else - we played it as our last song for the RA Alternate Cuts Mix Series.

Robbie: It was pretty special catching D.Tiffany play in a little basement club in London earlier this year. It was the first time I had seen her play and I couldn't move from the front of the dancefloor throughout the entire night. She played trippy electro and trance-infused selections all night, and ended with some bizarre remix of a Pussycat Dolls song, which was everything. Can't wait to catch her again at Kala Festival.

Do you have a guilty pleasure when it comes to music genres? If so, can you recommend a track in that specific genre?

We're both suckers for anything with an 80s vibe and cheesy vocals. This track couldn't encapsulate both of those things anymore if it tried:

Your 4th anniversary is coming up as promoters. Congratulations on setting such an amazing track record in that time. Are there still things that you'd like to achieve? When we last spoke, you mentioned something about throwing a festival — is there something in the works for that already?

I guess the main thing for us is to carry on booking the artists we love, both local and international ones. The list of acts we want to play at High Hoops is ever growing - almost out of control. We have found our home in Manchester at The White Hotel, so we are just focusing on keeping our regular parties popping in there and focusing on creating more diverse lineups. Maybe next year we would look at doing something bigger like a festival, but we are pretty content at the minute.