The Metamorphoses of Hakim Tafari 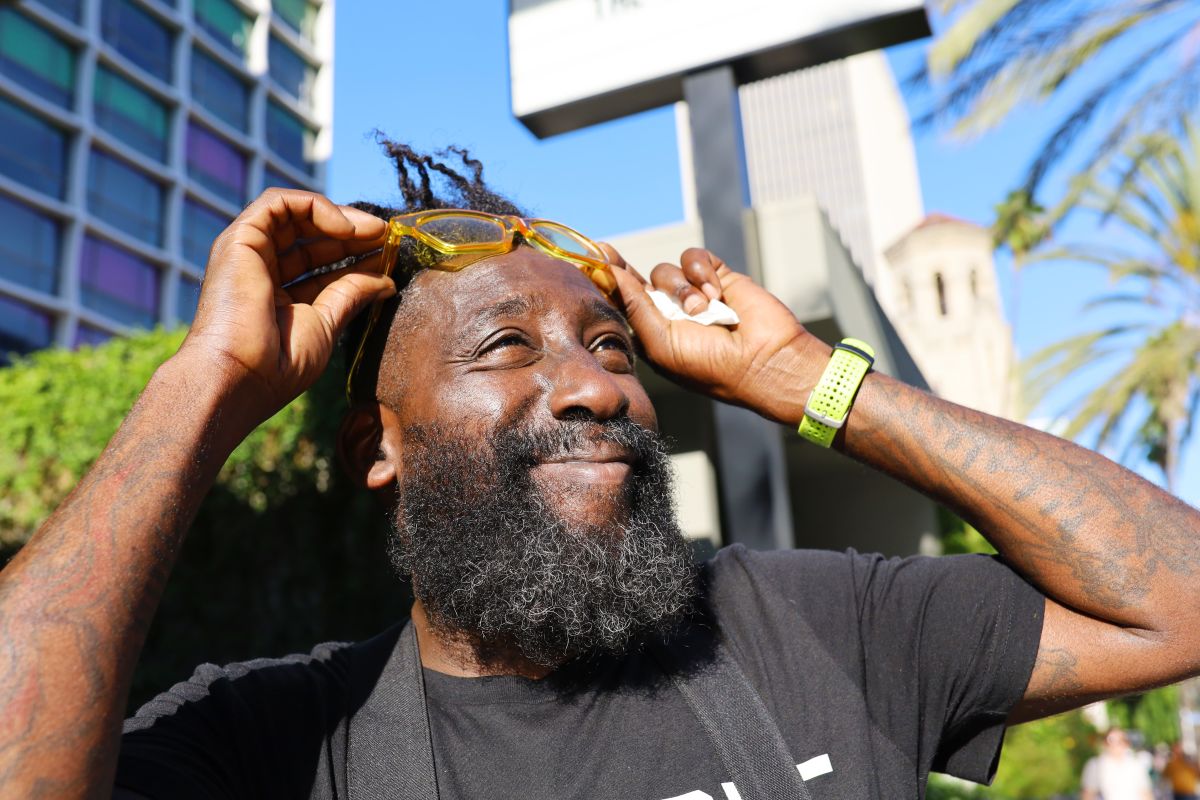 An unrelenting student of life, Hakim Tafari has turned his personal failures and triumphs into a roadmap for finding peace through mindfulness. As the curator of Vegan Boy Fresh and current resident tai chi expert at the Line Hotel, Tafari strives to make the search for a healthy life balance accessible, executable and inexpensive to all.

Dressed head to toe in a chic black getup, Hakim Tafari greets us with a toothsome smile on the patio outside Alfred Coffee. It is just as the golden hour is taking hold in Los Angeles, casting the very beginnings of evening shadow against the sun-baked pavement. He’s already ordered: a measured pour of whiskey, accessorised with an aromatic orange rind floating lazily atop.

“I’ve read some of your writing,” he informs me, before asking how I’d come to have the task of interviewing him. It’s not often I, the interviewer, find myself being interviewed, but our conversation unwinds, sprawling well past the thirty minute mark we’d initially agreed upon into an hour, and then some. I find myself sharing far more than anticipated, but also eagerly collecting nuggets of information about Tafari’s life to file away as lessons for myself. During our seemingly-endless conversation, we come to a mutual conclusion: from the self-styled fitness gurus of social media, to celebrity-anchored television shows that promise “revenge bodies”, we’re firmly in the midst of what can only be described as a wellness boom.

But what does self-care actually mean?

With so many disparate messages, most of us would be hard-pressed to definitively answer. This compounded with how the very idea of wellness, in all its convoluted glory, has become so commodified, the thought of revamping one's life for the better can seem too expensive to be within the realm of possibility.

Does health mean fancy fitness classes? Specialist-designed diets? Upscale meditation retreats? As we navigate a culture that proselytises self-care, it’s hard to ignore how the language around healthy living remains, well, murky. Tafari’s talent lies in clarifying those muddy waters, starting with the most important aspect of it all: the mind.

The son of Jamaican immigrants, Tafari was born and raised in Ipswich, England, and later spent time in London with his late sister, before relocating to the East Flatbush area of Brooklyn in 1991. “It was some school of hard knocks shit but it made me who I am today,” he reflects, comparing the landscape to that of the Steven Segall film ‘Under Siege’, where drug-trafficking and Jamaican gangs take centre-stage. “You see how there were yardie crews roaming the streets and stuff? It was literally like that.” Having dabbled in street promotion in London, Tafari quickly found his footing Stateside, leaving the East Coast and landing in Austin, Texas, during the infancy of SXSW. 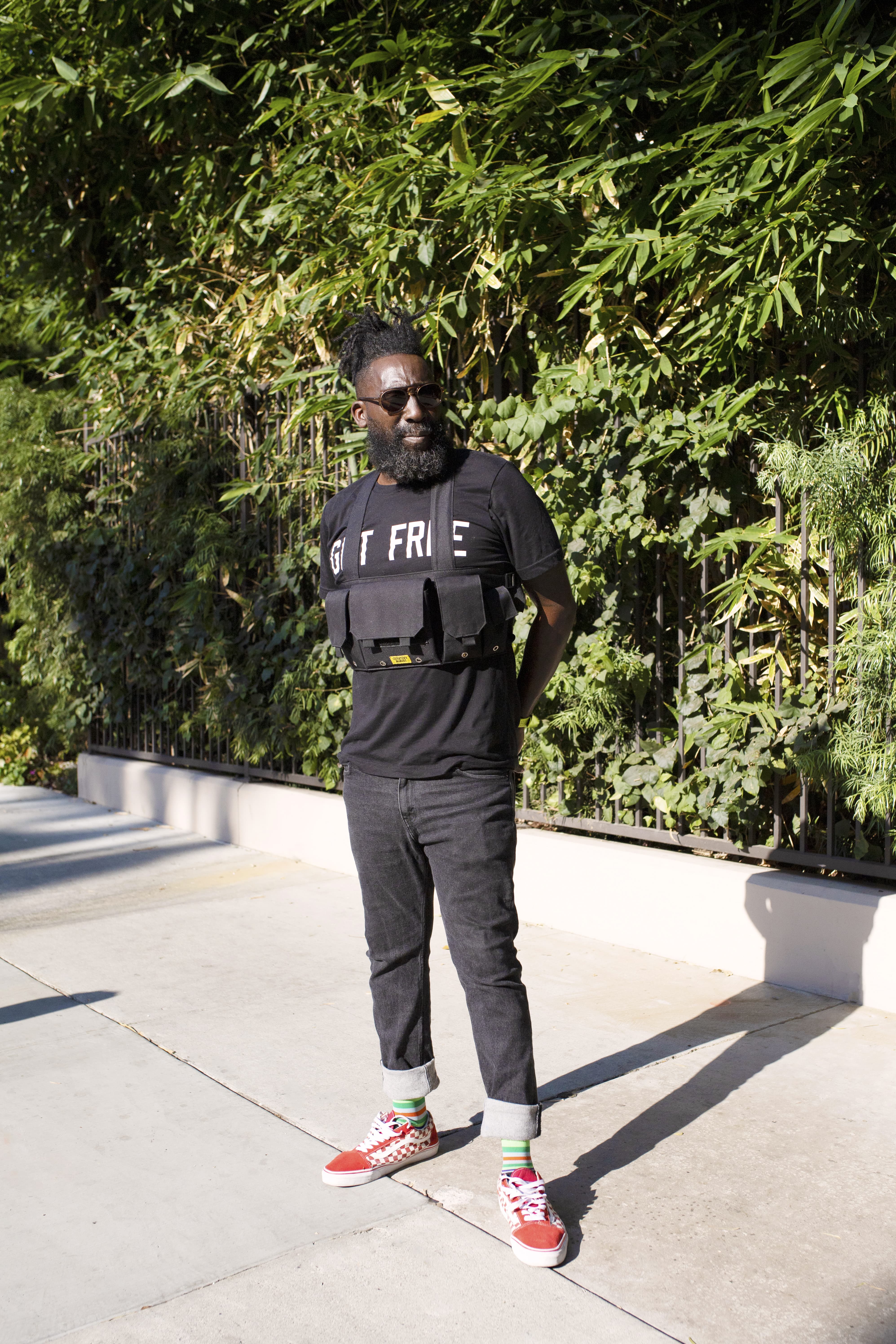 Hakim is wearing the Paul in Golden Brown

“I was dealing with so many things that weren’t conducive to my health back then. I was smoking cigarettes all the time, drinking large amounts of alcohol and eating large amounts of meat, but also not really being healthy as far as doing anything athletic,” he explained. This, in conjunction with the social aspect of street promotion, which saw him out five nights a week, contributed to the eventual deterioration of his health. “It was a crazy time because South by Southwest was so young and we were bringing in Wu-Tang, Xzibit, Big Pun, Hieroglyphics, Gravediggaz, Artifacts — we were the only ones bringing these groups to Austin. Plus, I was running with cats who were heavily into the ecstasy scene; it was like a movie: ecstasy, strippers, the whole nine.”

By the end of 1995, Tafari weighed around 260 pounds and was battling frequent bouts of illness. Then, in early 1996, while ordering food from the Chinese restaurant five minutes from his home, he happened to see a business card advertising kung fu lessons. Having grown up watching kung fu films, Tafari pocketed the card and called the instructor, who, rather serendipitously, lived only one street over from him. However, soon after their initial meeting, Tafari took ill. “I was bed-ridden for like three weeks. I was shitting blood, pissing blood, it was horrible. I also had serious bouts with irritable bowel syndrome, gout and acid reflux. At that time I was working at UPS and I had a really good friend who was Rastafarian, I called him Yoda because it felt like he knew everything. He helped me get on an Ital diet [a natural diet free from additives, chemicals, and most meat], and that was kind of the beginning of my journey.”

"It was some school of hard knocks shit but it made me who I am today."

Around the same time, Tafari stumbled upon a local magazine called ‘The Austin Chronicle’, which had a coupon for a free acupuncture session on the back. “That was all she wrote,” he shares with a hearty laugh that makes his full beard tremble as if it too finds the situation mirthful. The acupuncturist also happened to be a Buddhist monk, one who was all too eager to pass along his knowledge. “He ended up treating me and breaking down all of these health issues I was facing in a way that Western doctors couldn’t. Before I knew it, I had subscribed to veganism and Buddhism.”

Tafari admits the transition wasn’t without some difficulty. Having grown up in a Caribbean household where curry goat, curry chicken, rabbit and other stewed meats were dietary staples, rice and beans became his fallback for the first two years. “Coming from a meat-eating background, I was like ‘what do I go to?’ Being vegan I just wanted something that would even resemble or taste like something I was used to. Back then there wasn’t Beyond meats and all that stuff — vegan burgers were in cans. Vegan steak came in a can too, and it tasted like cardboard. In Austin during that time you had two places to get vegan stuff: Whole Foods and a place called Sun Harvest.” 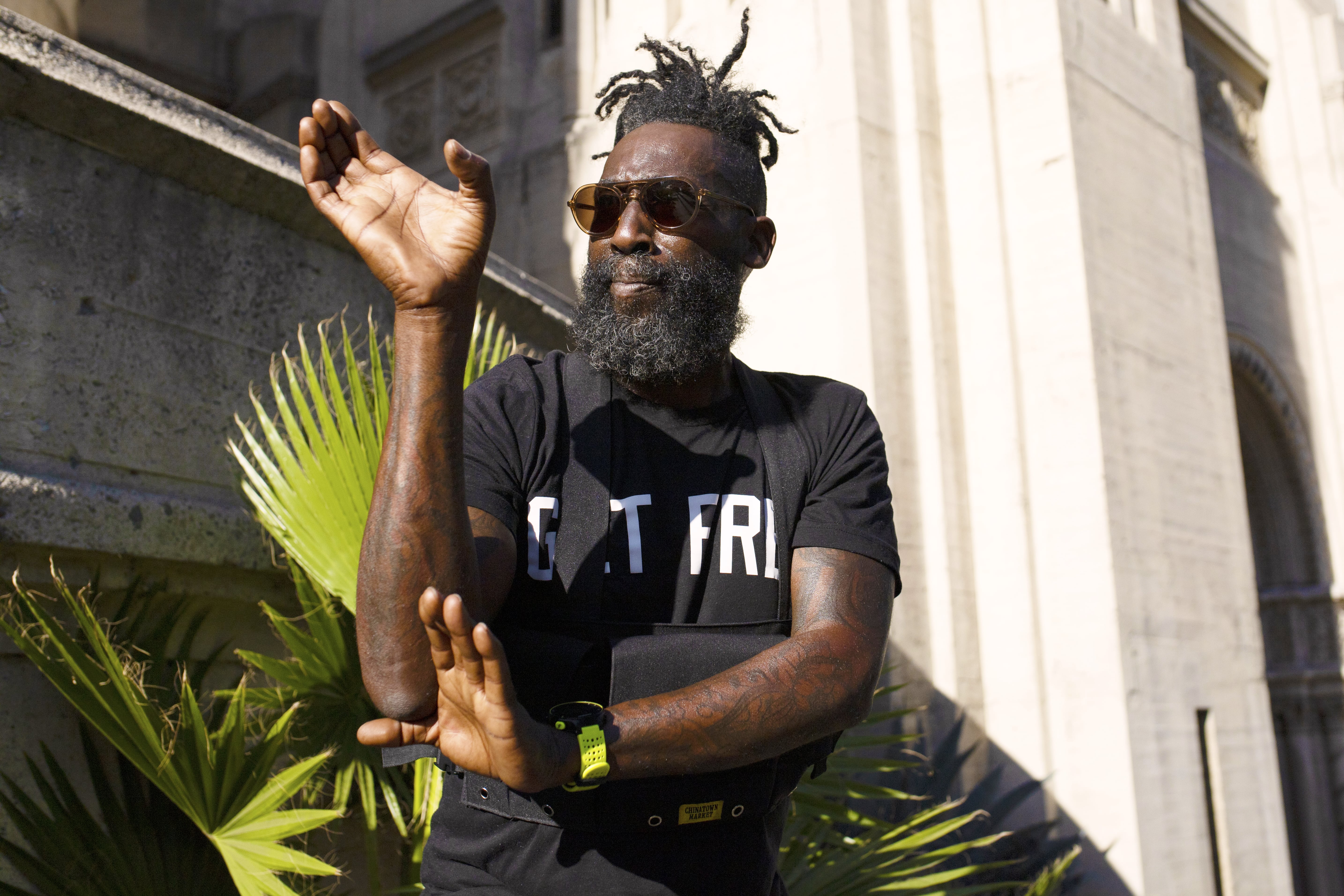 Tafari’s limited options were no match for his boundless curiosity though, and before long he’d befriended the owner of a herb store. There he would spend hours educating himself on the health benefits and culinary potential of her wares. “Soon I started mixing my own teas and concoctions, to the point that when I tore my meniscus, I was on a herbal remedy regimen. A lot of the herbs and spices that are popular for health benefits now, like valerian and turmeric, I was using before they were even a thing. I kind of just took what I learned and expanded on it, and over the years I ended up cooking for a lot of people that didn’t know about vegan and vegetarian food. I would hip them to it and that’s how I ended up converting a lot of people.”

Tearing his meniscus also introduced Tafari to tai chi, which was much more manageable to practice as he healed than kung fu. Now, looking back, Tafari describes it as a slower, more mindful version of the elements of kung fu that had originally enamored him. “I left Austin for Orlando and got into a body work programme,”  he shares. “I was one of the few black bodies studying and teaching tai chi. It was the same when I went to massage school and was a massage practitioner from 1999 through 2016, which is why even now on social media, I’m always trying to champion black voices within wellness,” he explains.

"Mindfulness is a major component in overall health and it doesn’t cost anything."

Tafari also consciously rejects the idea that taking care of oneself needs to be particularly expensive, which he acknowledges can be a barrier to some who are interested in improving their quality of life. “Look,” he says in the matter of fact way that has come to mark his most prescient observations. “I was a rough human at one point, a very, very rough human. It was nothing to me to get into an altercation with somebody. It was nothing for me to be loud and punch someone in the face. I wasn’t even always in the fights, but I was an antagoniser. I was such an angry person and it did damage to my health and my well being, and the well being of the people around me. Having kids was another thing that really changed my outlook,” he shared. Marriage followed by an eventual divorce that saw him living back in his childhood home with his parents as he rebuilt the life he’d once known, was also a proverbial fork in the road. It forced Tafari to make difficult choices about what he wanted his life to be.

“When you truly hit the bottom there really aren’t a lot of places to go, you know? I went from being this rough and very angry person to being in these situations that led me to finding Daoism and Buddhism, but what I was really finding was that you can have peace. Mindfulness is a major component in overall health and it doesn’t cost anything. What tai chi has done for me, what Daoism has done for me, what mindfulness has done for me and what Buddhism has done for me is to create a sense of calmness and serenity. I have a sense of time and place, a reason for me to hold space for myself and to hold space for others. For me to have compassion for myself and to learn what compassion and love for others is, well, it truly was a game changer, and it’s something anyone can have.”