Much ado about Niksen: A guide to daydreaming 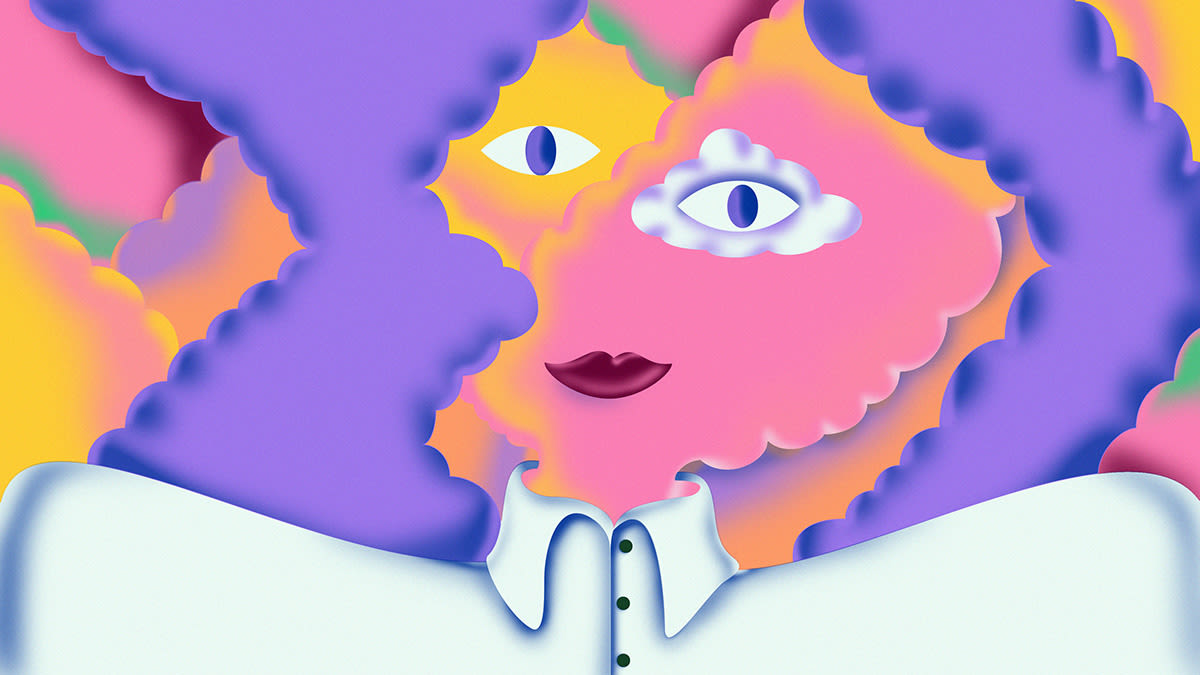 When was the last time you truly switched off and let your subconscious take over? Bet you can’t remember. ‘Niksen’ is here to encourage you to do just that. It’s a Dutch concept making its way all around the world, riding with the wave of wellness hypes that birthed 'hygge' and 'lagom'.

It’s pretty simple really: it translates literally to ‘doing nothing’ and is about taking part in a task that requires little to no concentration, in order to rest the mind. With ‘niksen’ — unlike meditation — you don’t have to ignore every little thing that pops up in your brain. In fact, it’s better to follow your thoughts down those winding alleyways.

We touched on something similar in our recent Balance Report, but with our hectic, social-media-filled lives, we don’t allow ourselves to daydream anymore. We’re told we need to come back to earth when we start zoning out, but surely, it’s better to have our heads in the clouds than stuck in a screen?

Daydreaming helps the mind process the day’s events and make conclusions. We do it for different reasons: to escape a particularly boring meeting or self-soothe when we’re feeling nervous. Studies have shown it can make us significantly more creative in the way we solve problems. In reality, we’re making a lot of fuss about something that comes naturally to us, if we’d only take the time to ‘niksen’.

No matter how different we are, our daydreams seem to feature universal themes. With our companion to these familiar parallels, we could all become daydreaming aficionados; recognise what’s troubling us and eventually, learn about ourselves a little bit more. We’re also looking at those who have been able to funnel their daydreams into their creative processes, for an extra boost of encouragement. 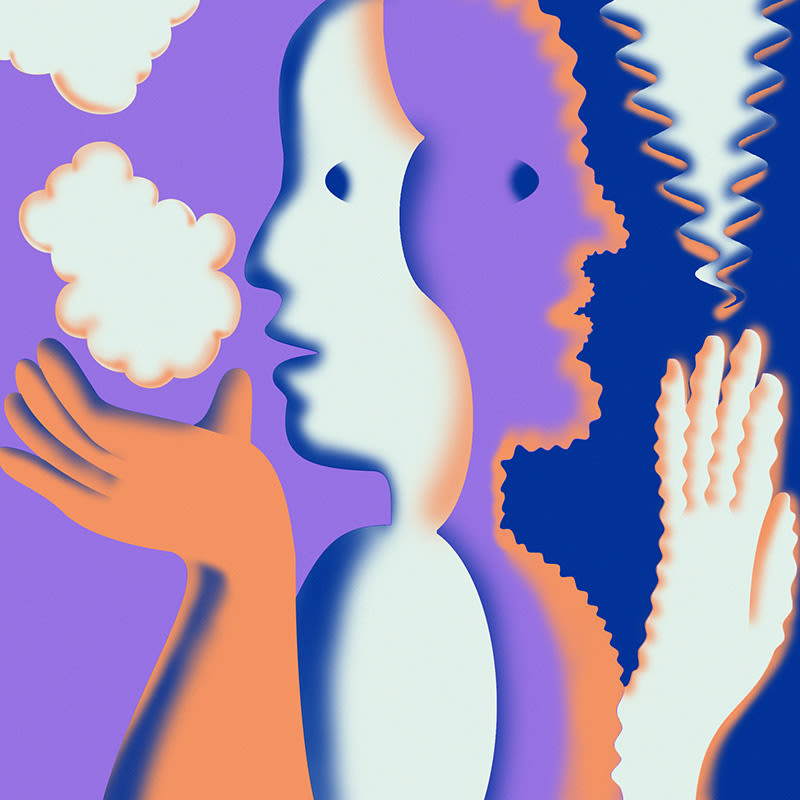 Imagine standing over the sink while washing up. The sound of the running water puts you in a trance and you start to drift away. It’s intriguing to notice which directions your mind takes when you’re not limiting yourself. Just look at anonymous Instagram account Bread Face Blog for inspiration. She’s amassed almost 200k followers from smashing her face in baked goods, all initiated because she “thought it would feel good”. Thinking outside the box can lead to all sorts of unexpected results.

When daydreaming, do you let your mind wander aimlessly, jumping from subject to subject? Little cloud-like ideas approach, maybe even interact with you a bit, but float away again before you can really get a hold on them. You don’t mind, you’re already onto the next cloud. This is just your mind taking a little break from being active. Often triggered by mindless tasks, it’s the perfect opportunity to enjoy the transient feelings and get lost in a happy maze of thought.

If, on the other hand, you’re reminiscing about a specific event from the day, or previous week, something’s probably playing on your mind. You’re passing your sponge over a plate and suddenly, you can’t stop thinking about that conversation from earlier where you knew you were right, but you gave in anyway. Ok, this isn’t the most enjoyable way to daydream, but at least it gives you time to analyse how you handled the situation. Often, these moments allow time to realise if something is worth holding on to, or throwing away, like all that gunk that gets stuck in the kitchen plughole. 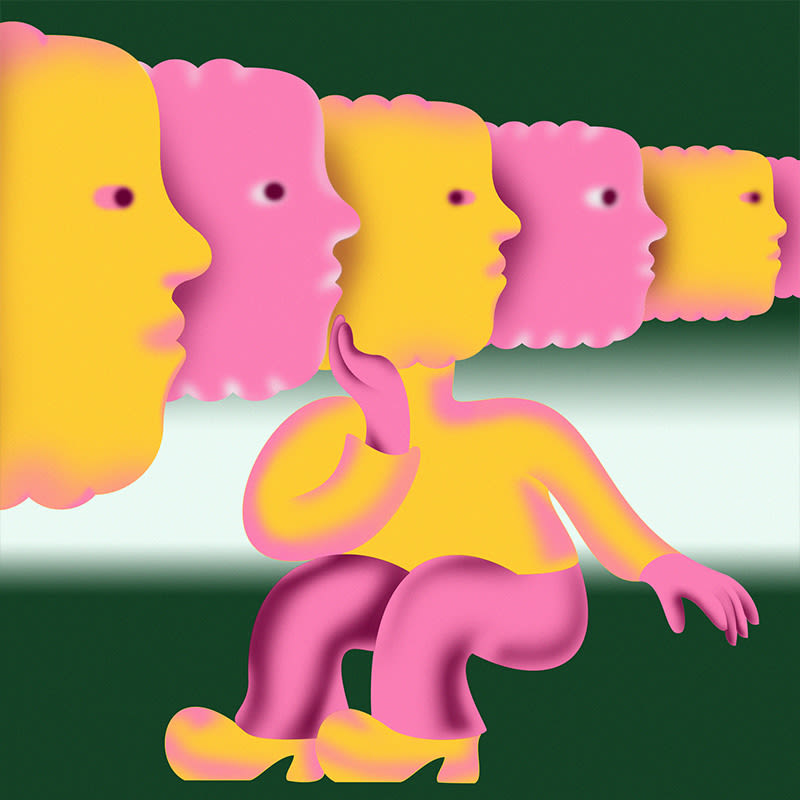 Next up, you’ve just arrived home from a long day at work. You throw your bag to the side and collapse on the sofa, staring at the ceiling and enjoying the white noise from the cars passing by outside. Images start to appear before your eyes and before you know it, you’re lost in thought.

Although it can be frustrating, recollecting the past is a good indication you’ve got some unsolved issues you’re subconsciously trying to work through. Use this opportunity to figure out how you might approach a potential conflict situation in the future. It won’t make everything easier, just try not to stew too much.

On the other hand, nostalgia’s totally in right now. Ask photographer Kevin Osepa, whose book Mester Blousé, is all about musing on his youth and superstition on the island of Curaçao. It’s filled with romanticised images of days passed, perfect for igniting the spark of your own sentimentality.

As you’re dozing, you might instead, look to the future. Perhaps you imagine getting a phone call regarding the interview you had last week for a second round, or better yet, a job offer. If you tend to look into the future, it means you’re optimistic about what’s ahead. There’s nothing wrong with a little positive manifestation, but let’s be realistic, you’re probably not going to win the lottery and live the rest of your days on a private island. 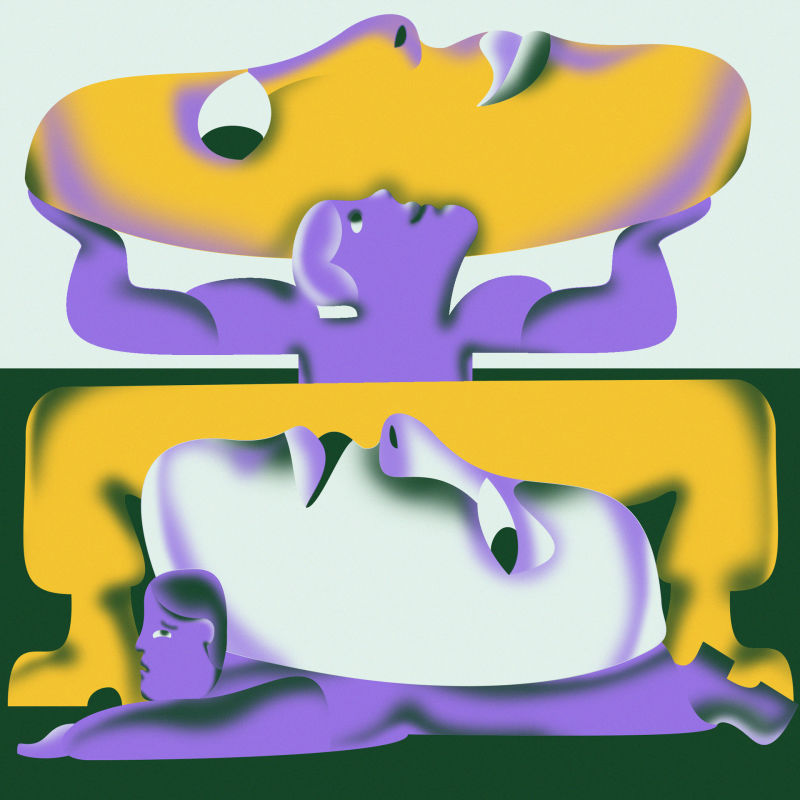 The heroic victor vs. The suffering martyr

Picture this: you’re in the doctor’s office, flicking through an overworn magazine. You aren’t focusing on the pages at all; you’re miles away, with pretty existential reflections taking up space in your brain. You can’t stop thinking about every time you’ve won or failed in life.

Let’s all just admit it, we’re way more witty in our imagination than in real life. If your daydreams often involve you replying to the school bully with the perfect comeback, it means you’re ambitious. Younger people are more often victorious in their daydreams than those of advanced age, perhaps because they’ve got more to prove. Try and focus on exactly where you’re winning and it’ll help you choose your path for the future. Some people call it following your heart’s desires.

However, you might be thinking about what you actually ended up blurting out to the school bully, which resulted in a round of people laughing at you, not with you. We’ve been over how much failure sucks before, but unfortunately, it is an important part of the daily grind.

It may be painful, but making mistakes in your imagination means you’re really in touch with your emotions. You’ll probably notice the more you think about something, the less intense the feeling of embarrassment or upset becomes. Reflecting helps us come to terms with things, so don’t beat yourself up about it, alright? 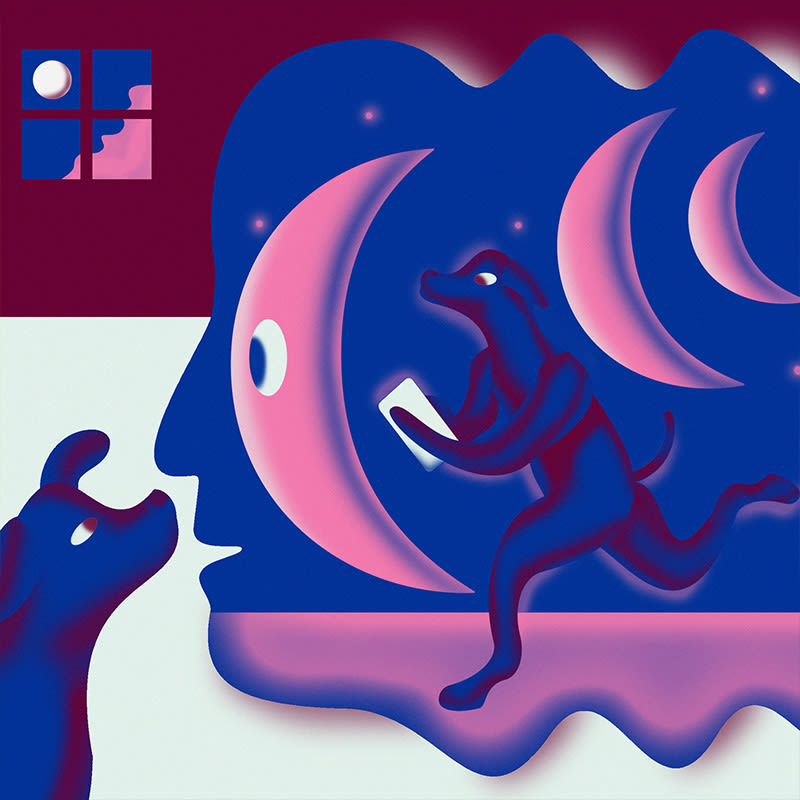 You’re getting really deep into these daydreams now, in fact, you’re finding them quite enjoyable. Here’s a tip: try it when you’re in the passenger’s seat of a car, heading home in the dark. There’s something hypnotic about the reliability of street lamps — knowing you’ll pass one every fifty metres or so — that lends itself to zoning out.

Let’s say you’re imagining taking your dog for a walk, but what does this walk look like? Is it in your regular park, or are you on a planet with three moons and pink trees, chatting with your pooch about how terrible the state of the housing market is? Quite logically, if you tend to hallucinate about things that are less rooted in reality, you’ve got a strong imagination. Getting your creative juices flowing may not always be easy when you try to force it, but it will dart in wild and varied directions when you don’t try.

If you’re jealous that you aren’t able to talk to your dog, look to photographer Yuan Xiaopeng. His Suburb View series reveals the humour in absolutely boring elements of everyday life, such as a Starbucks mermaid on a plastic cup, floating among carp. If we weren’t all so addicted to our personal devices, we could notice our surroundings with new eyes.

Anyway, those who are more focused on realism have a good memory and can recall past events in detail more easily than those who spend their spare time anthropomorphising pets. Quite handy for when your phone’s been stolen and you have to remember the name of your favourite teacher and the date of your first kiss in an attempt to log back in to the cloud. 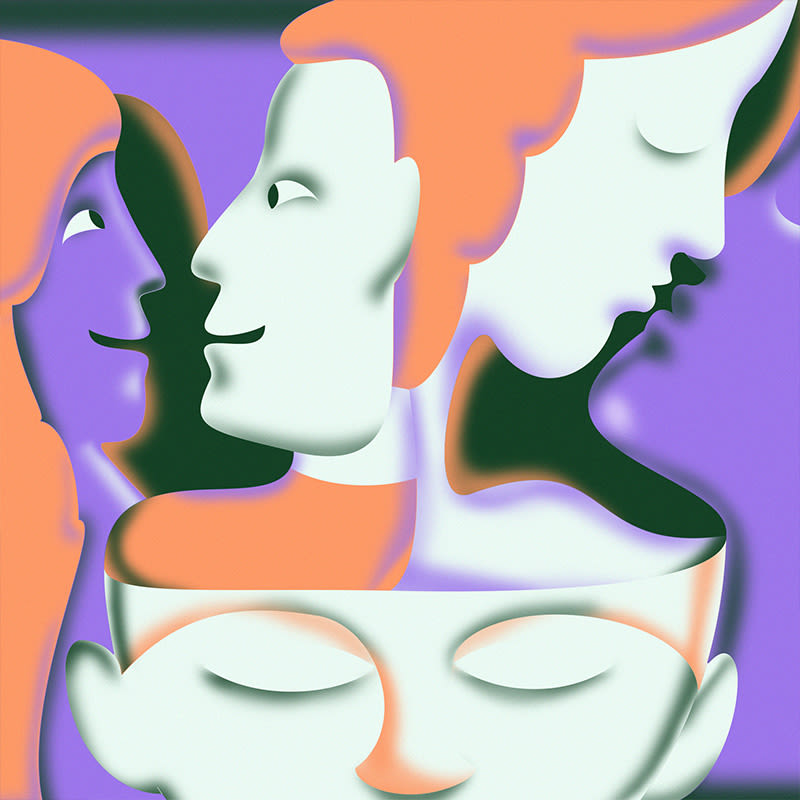 Just friends vs. Friends with benefits

You’re pretty good at daydreaming now, so here’s one last situation: you’re in bed on a Sunday morning. Instead of reaching for your phone at the first opportunity, look at the ceiling and follow the patterns in the paint work. Think about the day ahead and reflect on your relationships.

No matter who they’re with, relationships are pretty complex and take up a huge amount of energy, so it’s natural to fantasise about them, too. If you’re not going to admit that you’ve daydreamed about sex, you’re lying, so snap out of it.

If, on the other hand, you reminisce about that night on the sofa with your family or friends, where you laughed until you cried, you’re in a pretty good place. Thinking a lot about the people around you means that you’re satisfied with the position you’re in. No man is an island and a strong support system is vital to a healthy mind.

Daydreams are something we all experience, but in reality, they’re quite difficult to pinpoint. You might find that actively taking time out to ‘niksen’ may not lead to the lightbulb moment. That’s the fickle nature of it, but don’t give up on the first attempt. If it does work, try to figure out what your broodings mean to you, you might learn a lot. It’s quite contradictory though; if we monitor it too much, it kills the fun.

Still need some encouragement to switch off? HeeJae Kim’s Zone Out series consists of posters combining graphic design and illustration, featuring the objects he would pass on his daily commute from the New Jersey suburbs to New York City. The images inject wide-eyed joy into a mundane routine, showing what the subconscious can do.

So, go ahead, do something mindless for half an hour every day this week and see if you get anything out of it. Next time you’re on the brink of switching off, don’t try to fill time, but let your mind go with the flow. Get bored, turn your third eye on and see where the dream machine takes you.

We’ve been thinking a lot lately about how we can make our lifestyles a little more zen. In fact, we even launched a report all about the importance of balance a little while ago, which might be a good place to start, if you’re feeling off-kilter.