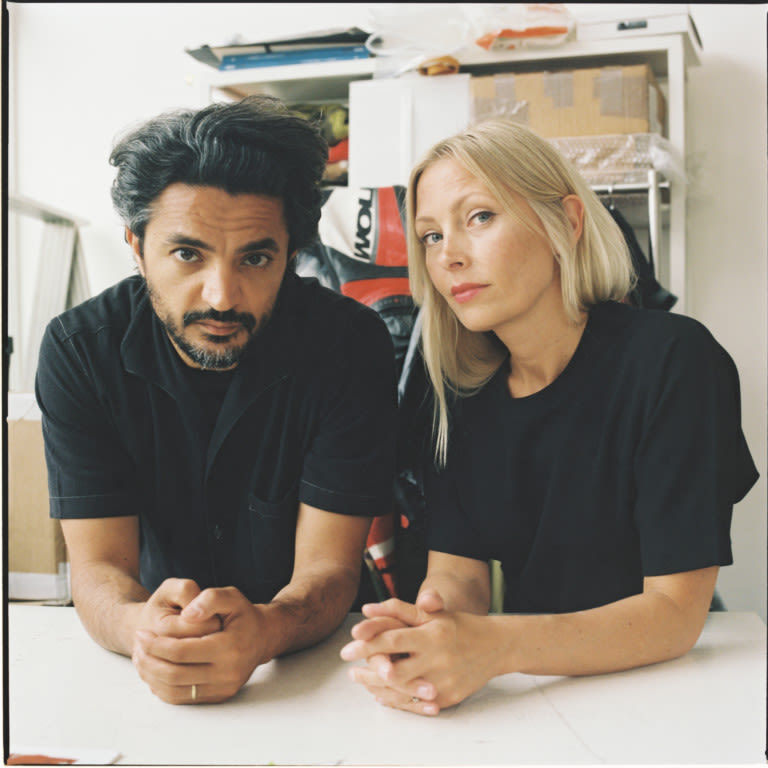 Emma Hedlund and Saif Bakir, the design duo and fresh visionaries behind menswear brand CMMN SWDN, are a twofold force to be reckoned with. Forever playing with contrast and duality, their collections sit perfectly on the high wire between the nostalgic and the futuristic. Having evolved and found their footing in Malmö, Sweden, the Ace & Tate collaborators and their brand now function predominantly in London, where they have recently shown their standout AW18 collection.

Catching up with the pair over Skype, they first muse over where the drive and spark to create their own brand of menswear came from: “I think there were a few things that led up to us starting our own brand,” Saif begins. “Obviously, I think it all started by working with Kanye [West] together when we were setting up his brand.” Integral to the early evolution of Kanye’s dream, Emma and Saif soon began to realise what they were capable of achieving for themselves. “Setting up his brand and vision in Paris and starting from scratch, when he moved on we eventually realised: ‘We’ve done this, so we could do it for ourselves too: communicating the designs that we can stand behind and communicating our vision.’” Saif pauses for thought. “It’s like being an artist really—you want to create and to communicate”.

As for the birth of the name? “Oh yeah, that’s a debated one…” Laughing, they begin to attempt an explanation. “It’s quite silly, I guess, but at the time there was a lot of talk about sustainability—well, there still is—and people were going back to doing things more locally. Handmade things and local production became very important… So for us, we were thinking back to how Sweden used to be a country that manufactured its own fashion. The idea was to go back to Sweden and create a brand that was made in Sweden…” Emma, finishing Saif’s sentence—a common occurrence between the pair throughout the course of the conversation—continues: “the idea was to create something common in an uncommon way.”

Malmö provided the perfect backdrop for turning their CMMN visions into a reality. Having studied and worked in London—Saif and Emma originally met as students at the London College of Fashion and Central Saint Martins respectively—the return to their hometown was a natural move and one that had positive results for the brand in its early stages. “It’s multi-cultural, it’s very creative and there was nothing else out there at the time,” Emma begins. “We actually gained lots of attention from Sweden at the time and won the Swedish ELLE Award after one season, even though they normally award it to more established brands.” A “working class city like London”, Malmö not only provided the diversity and inspiration the pair required but allowed the brand to develop and be noticed in an environment both creative and not overly saturated by like-minded designers. From there, developing into something “far more international”, the brand is now based in London where they have “shown for six seasons and grown so much”. Having quickly gained attention from the British Fashion Council, the designers are astounded at what has been achieved since the birth of CMMN. “It’s amazing really how it’s only been six years!”

Influenced extensively by their surroundings in both Malmö and London, the designers muse over how this is present within their designs. “I think living in London gives you so much energy and there’s a constant flow of inspiration,” Emma thinks aloud. “You just go out the door and there’s excitement. I think London is definitely one of the biggest sources of inspiration for us, and has always been.” Saif, agreeing, shines a light on the beauty of diversity in both Malmö and London. “The beauty of living in a city like London and Malmö is that you could be anyone—everyone is from everywhere.” 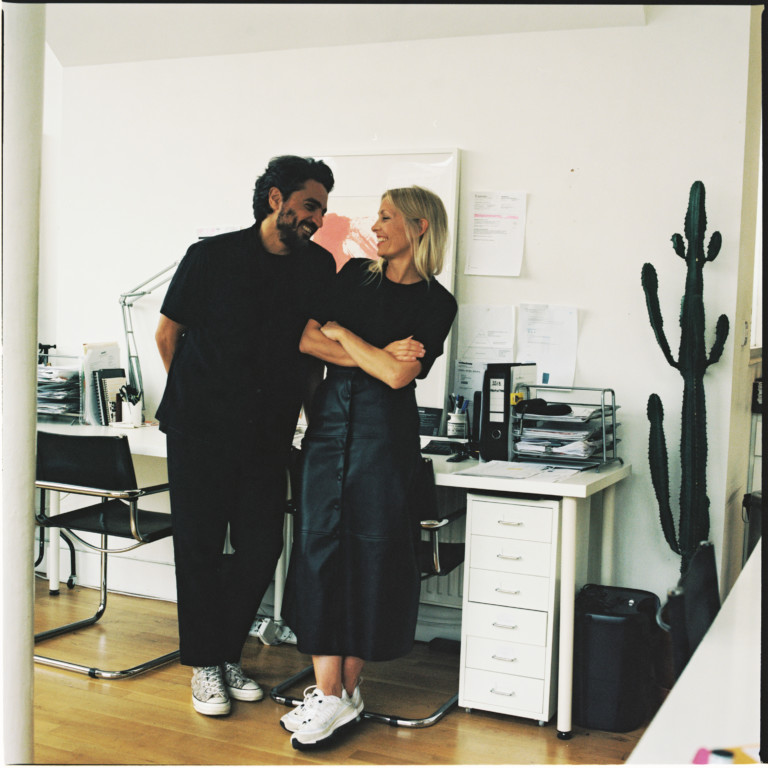 Having worked together professionally both as a couple and apart, the pair frankly discuss the balance they maintain between work and play. Both laughing, Saif states: “You know, we’d worked together before for Kanye and whatever, so it was quite easy going into work and being professional and then go home to being a couple. But you end up talking about fashion and business all the time, which has its pros and cons…” Yet the pair emphasise how this only confirmed their passion for the path they had chosen: “You know, I think we’re pretty blessed to do what we do—to be together and work together all the time. I think we’re pretty blessed being able to spend so much time together.”

Talking to Emma and Saif, it couldn’t be clearer that they are the ideal partnership both inside and outside of the studio. Once again finishing each other’s sentences, Saif begins to highlight how in terms of design they complement one another, forging the force CMMN holds today. “With Emma’s background in womenswear and my background in menswear, I think that combination is key, really.” Indeed, with Emma’s looser approach to colours, textures and materials and Saif’s more structured direction, there’s an off-kilter yet perfect balance.

In line with Emma and Saif’s aesthetic, the range of sunglasses made by CMMN SWDN in collaboration with Ace & Tate is a lesson in playing with opposites to create something innovative. Minimalist and echoing ’90s rave culture while showcasing a clear romantic throwback, the whole concept was simple—and relevant. “I think it was at the time that we were thinking about our AW18 collection that we were looking back to what we thought the future would be like. And that was the first idea for the collection,” Saif reflects. “It was all so futuristic.” Having seen “both worlds” growing up in the (mostly) analogue ’90s, they see this nostalgia more as a fear of things to come than a longing for the past. “[People] just don’t understand what’s going to happen and the fear of that makes them nostalgic and go back in time.” The investigation into duality is not a first for CMMN. With their recently released AW18 collection given the moniker “Nostalgic Future”, their constant search for contrast in their designs is “really what sets [them] apart”.

However, the glasses are far more than merely a retro take on the futuristic. Designed for strong characters—“big personality, small glasses”—they challenge the whole purpose of sunglasses, used so frequently to hide from the sun and those around. While “pretty taboo” for sunglasses to be purposefully made for use indoors, Saif emphasises how this was integral to the design: “they are not something that you’re hiding from the sun with but something you are going to the club with.” With obvious Bladerunner references in the colours, shapes and names—“the original Bladerunner,” Saif adds automatically—these shades are as innovative, playful and standout as their designers. Not merely looking to the past but straight into the future of fashion, we can’t wait for what’s next in the CMMN SWDN universe.