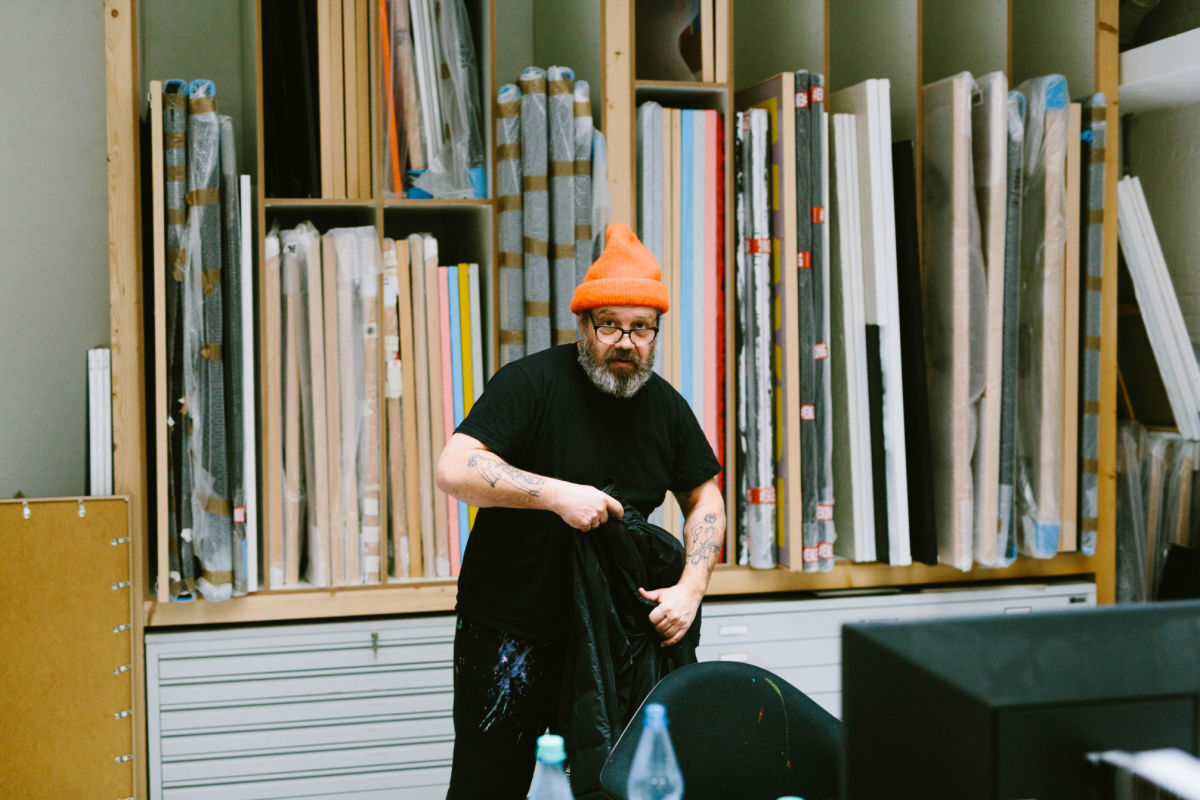 Eike König doesn’t like to talk about himself. The graphic designer, teacher and founder of Berlin-based design studio, Hort, is used to letting his work speak for him — which it usually does, in all caps.

That doesn’t mean he won’t talk at all, though. Throughout his career, Eike has used his voice to boost young and upcoming designers as well as his own artistic ventures. His works combine simplified images with statement-making bold type — perhaps that’s why he doesn’t feel the need to say too much.

We’ve worked with him a few times before, including the design of our third store in Berlin, which features his signature graphic style in- and outside the building. To celebrate its opening, we met again over a video call and chatted about a lot — from fatherhood to Instagram. He’s got a lot of opinions, but often corrects himself after making a point, so he can express both sides of the argument. However, there are things Eike wouldn’t spill: “I have a lot of secrets. I will not talk about them!”

Eike might have a large portfolio and experience being interviewed, but he’s not one for premeditated responses. At first stumped when asked how to describe himself, he finally concludes, “it’s not what I’m doing that describes me, but how I interact with people. I think that’s way more interesting for me than to talk about the work I’m doing; other people can do that.” 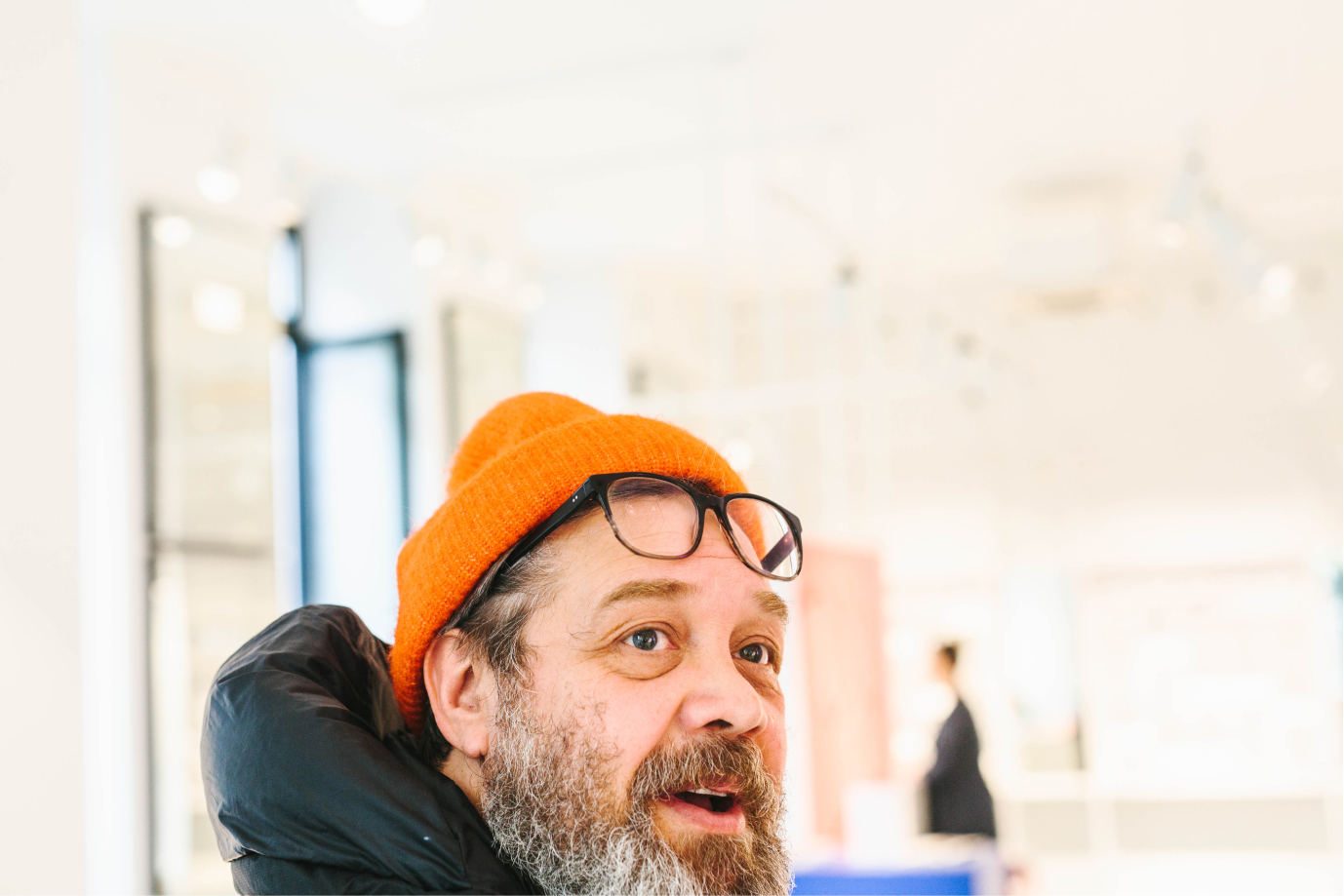 Working well with others is something that Eike considers vital to his success. After founding Hort in 1994, he’s realised the benefit of connecting with the right people. “I’m very privileged: where I am right now is because of who I am working with, but that all depends on me as a human being, feeling responsible for other things than just nice pictures and great typography.

“My job is about leadership, listening to [my colleagues’] fears and needs and not being arrogant. I like to invest in relationships and the longer you work with people, the deeper the relationship is.” It makes sense — being nice to people makes everyone happy and results in better work.

Knowing when to stop is also vital to the collaboration process. “I think I have a good intuition. We have a short time on earth, why should I put energy into something where I don’t feel respected, or where I don’t see any progress in it? You gain a lot of respect for yourself by saying no. A lot of people come back and I think that’s also success: if people feel comfortable working with you, then they come back. That’s an investment.”

Eike has been a leading figure in the graphic design industry for twenty years, but he didn’t ever plan to get where he is today, “I was very naïve when I started my own company. I never had a business plan, that’s not me. I always tend to live in the now, I don’t look back or into the future, but I try to really use my energy in the moment.” Not having a plan also means there is a lot less pressure to succeed (whatever that means). “I accepted that I wouldn’t be a rich person, because I do what I want to do, but also because of that, I have a very fulfilling life.” 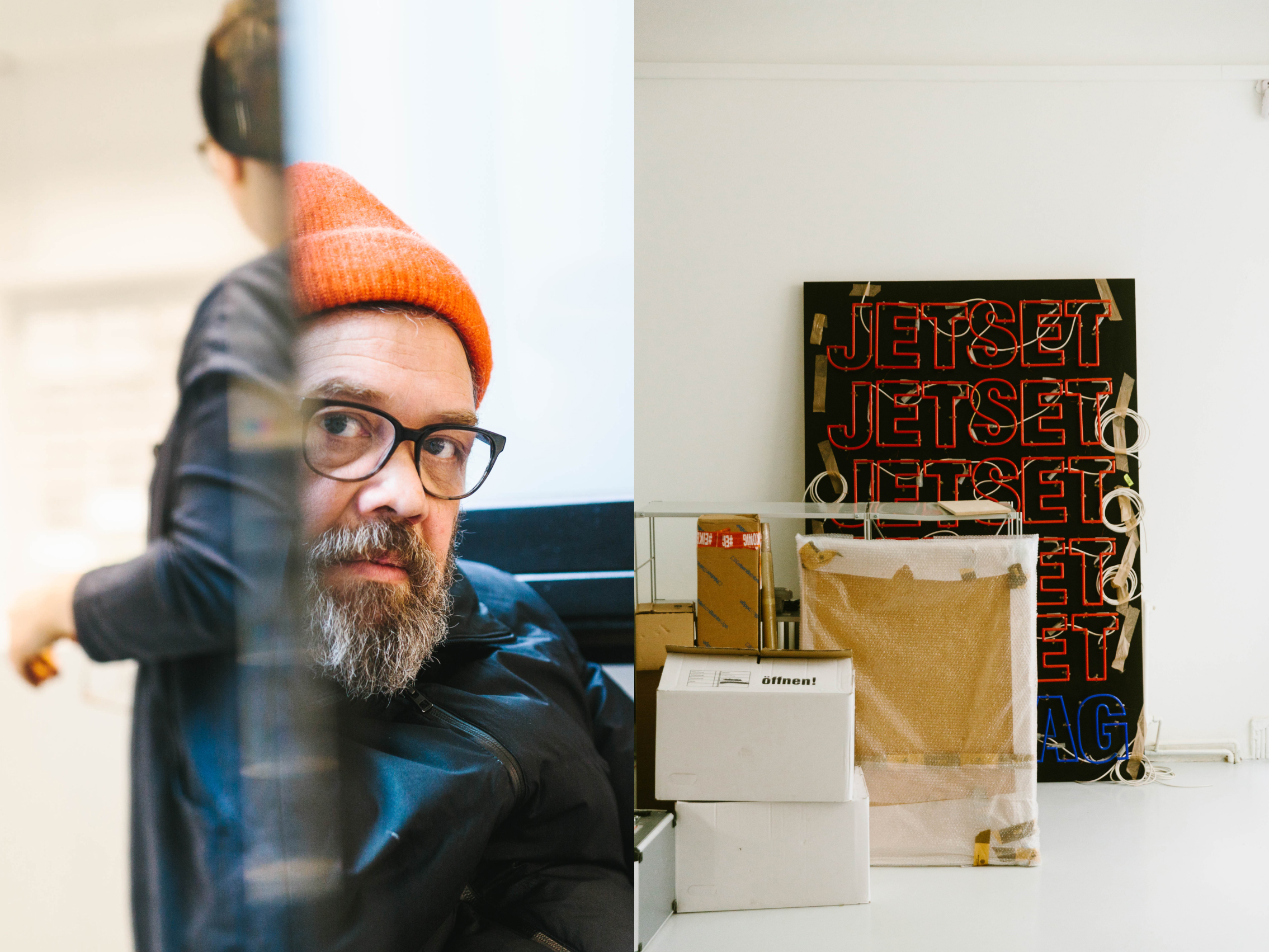 On the other hand, that doesn’t mean that Eike had it easy. After starting his career as the creative director of Logic Records, he became aware that he didn’t want to get boxed in. “If you design record sleeves, people have it stuck in their minds that you’re a graphic designer for the music industry. I always needed someone to help me open a door.”

The rise of the internet has changed the way we work and makes it a lot easier for Eike to break through. “I create an identity [for myself] by using it. I make contact worldwide, I sell my editions through it. I know that Instagram will die one day — I don’t want to advertise it — but right now, it’s a really great tool for me.”

As handy as the internet is, “I would like people to see my work in real life: it’s a totally different experience. They can smell it, they can touch it [he was probably joking], they have a real connection to it.” This sentiment links to the work he’s created for our Berlin store — IRL PLS (in real life, please) is painted across the wall outside and it’s all about the importance of interacting without a screen distorting the view. This is more relevant than ever — we’re now five months into a pandemic that’s forced us all to adjust our ways of living, working and loving. Human connection is more valuable and seldom than we’ve ever known, so let’s grab on to it where we can (while keeping a safe distance, of course).

“In the end, I would like to not need Instagram anymore. Posting is promoting. But I know that all these big brands are looking at what we [at Hort] are doing and contacting us because of that.”

It’s a truth almost-universally acknowledged that if you’re an artist, you’re probably a bit pretentious, but Eike isn’t precious when it comes to his ego. In fact, he wants his ideas to be challenged — and they often are, even by his own family. “When a child comes into your life, you question your whole position. Before, I was very egocentric, but now I’m a father, I have to shift that away. It forces me to look inside myself and change my thoughts on a daily basis.” 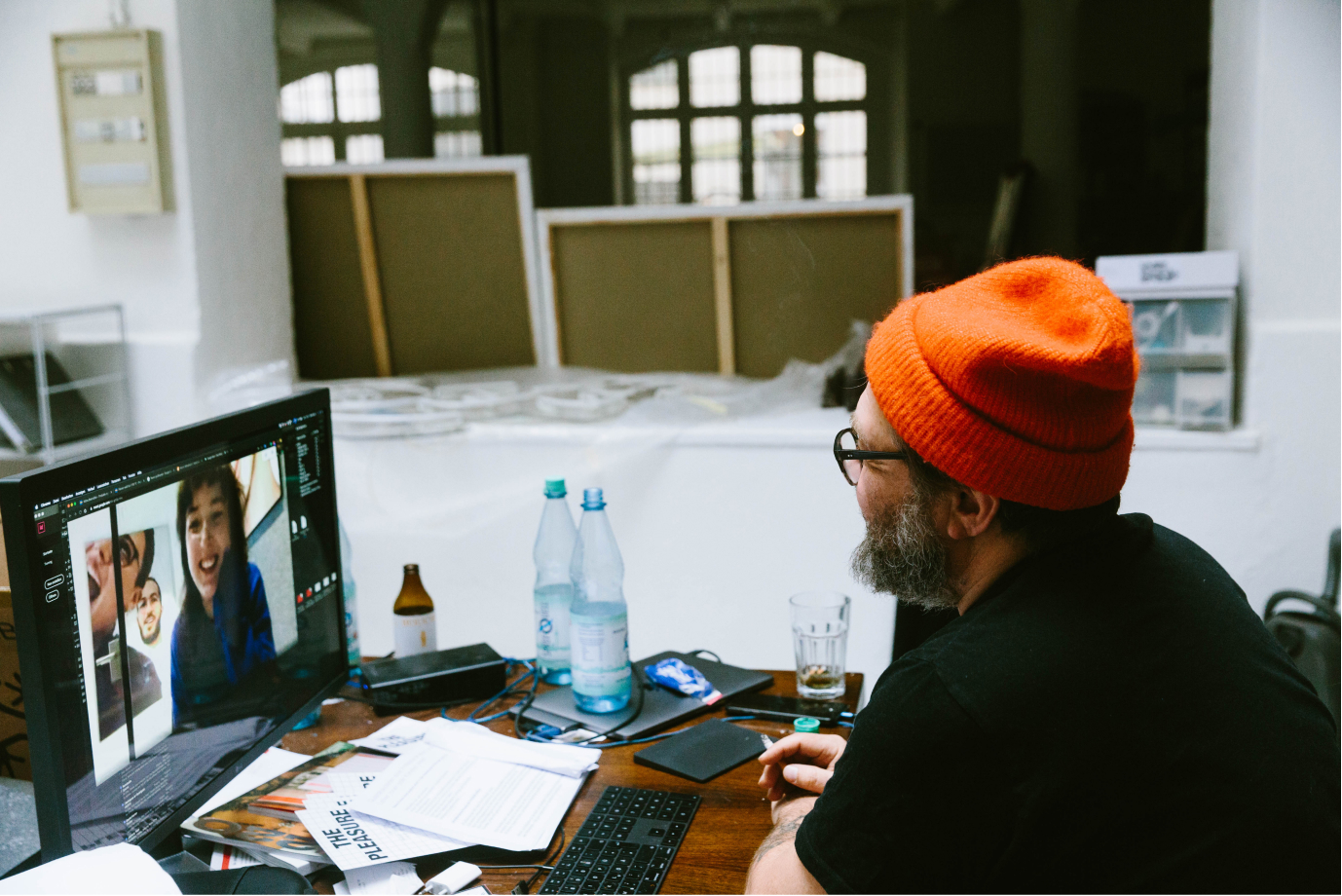 Luckily, Eike’s not stubborn. “Opinions are never facts, they’re just cluttered things, based on your own experiences. Having other perspectives really gives me the ability to question my own opinion and maybe accept a new one which is even better.” He even uses his work to question himself. “I don’t produce work for an audience, I produce it for myself. The questions I ask are always questions to myself, but if it would stay here in my studio, then it wouldn’t change anything besides me.

“I would like to share my thoughts and my questions and if there’s some other person who gets moved by it, that’s all I want, that someone starts to think about something. That sounds naïve, but that’s my intention, to put it outside so people can see it and react to it.”

At the end of the day, Eike recognises the importance of connection, be that personal,  separated by a canvas, or even a phone screen, particularly in today’s political climate. He makes bold statements in his work, but is also aware that he needs to keep it open to interpretation. “People can read whatever they want in [my work] and I don’t judge it. It’s a starting point, it’s an offer from myself to the audience, to the public and they can accept it, or just ignore it. It’s for free.”

We collaborated with Eike König on the design of our Berlin Kreuzberg store. Give it a visit, book a free eye test and check out our collection if you’re in the area.