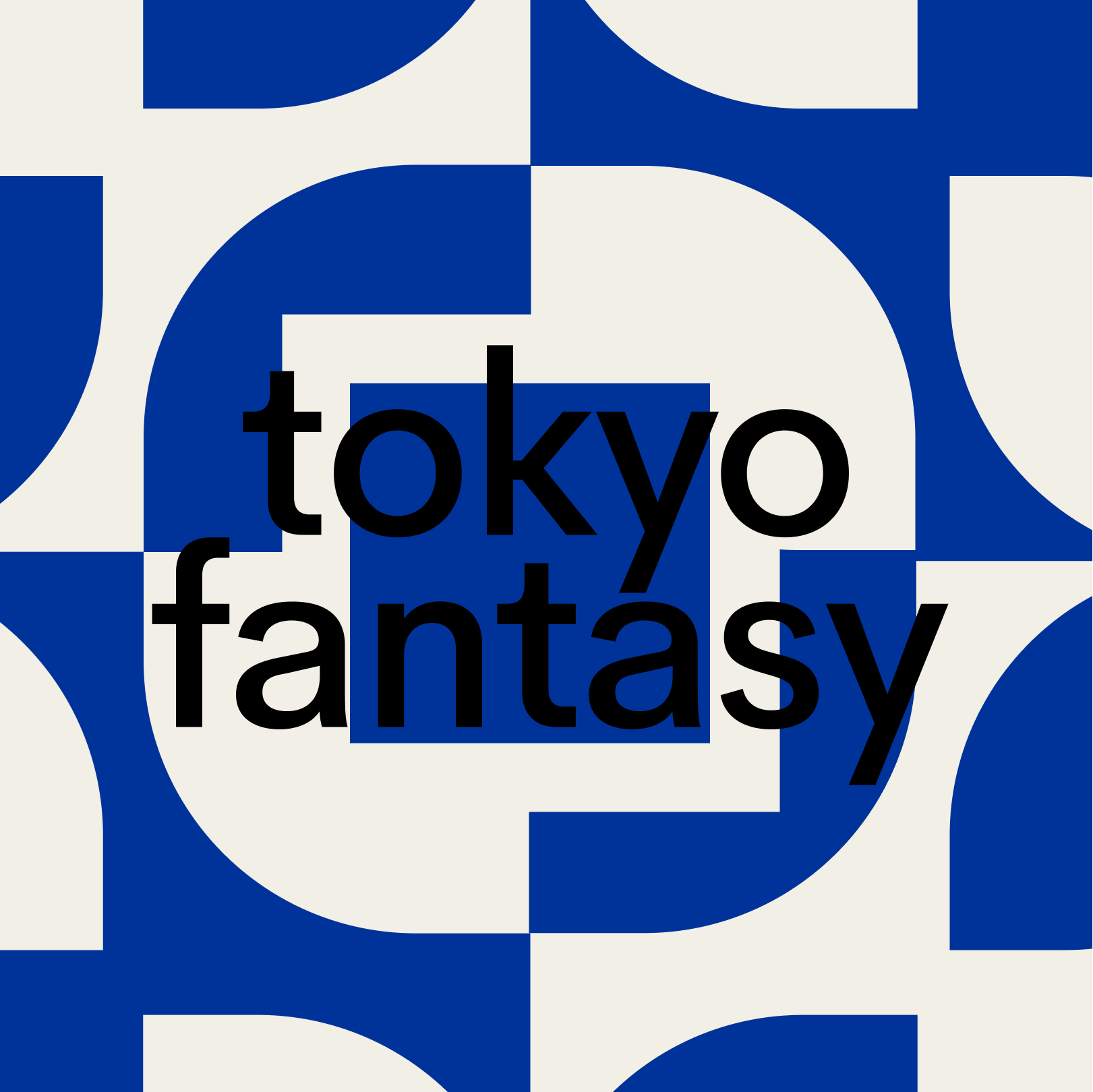 Whilst they have outgrown their reputation as “perpetual warm up DJ’s”, Cam and Fergus do know how to de-ice a crowd like no other. This is exactly what you’ll hear in this 1 hour 45 mins long mix, developing gradually from smooth-as-Sade tracks, to dubby instrumentals, into boogie, slow Italo, African voodoo, finishing off with some grade A disco. Absolute diggers delight, without any of the pretentiousness. As they say, break out the lambrini and enjoy.

Hi Tokyo Fantasy, can you give us a little introduction?

Hi Ace & Tate, thanks for having us. We are Fergus and Cam, and we’re a pair of music dorks based in London.  We’ve both individually thrown parties and played records for a long time, but we joined forces as Tokyo Fantasy about a year and a half ago when we were introduced by friends. It was a bit like a successful blind date for wannabe promoters. We DJ under the name together, run a mix series on Soundcloud and we put on parties at our second home, The Cause. We also want to give a shout out to Jack, who’s been our brother and teammate since day one and DJs and runs the parties with us.

What’s the idea behind the music you’ve recorded for us?

We wanted to recreate that sweet spot in a warmup slot, just at the tail end of the sleazy openers and just before the screw turns and things move up a notch. That part of the evening when dancers shake off their party quivers and get out of their heads and into their bodies. As perpetual warmup DJs, this is a gear we are well acquainted with, and it’s usually when we have the most fun in anticipation of the party ahead. The aim is for the mix to suit that final hour at work on a Friday or that get-together at a mate’s place on Saturday, just when you’re switching off and thinking about the night ahead of you. Break out the Lambrini and enjoy :-)

Do you want to point us towards any particular tracks that you’ve included, that you’re excited about?

Fergus: In keeping with the mix’s Balearic feel, it felt right to include some early Paul Oakenfold. The track I’ve singled out by him is called The Project Club — Amnesia, released just one year after Oakenfold’s first trip to Ibiza, and which I bought for about 80 Pence on Discogs. According to the Youtube comments, the record (and its b-side) was big in Shoom, the London club opened by Danny Rampling, where many of the early adopters of Balearic were hosted. For an insight into the UK’s interpretation of the Balearic sound, it’s worth checking out Tabitha Denholm’s Berkshire Goes Balearic documentary on Dazed Digital. It tells the story of how the suburbs of England favoured Balearic escapism over UK rave culture, and it’s packed with photos of dancers and DJs from that era, including a young and beardless Andrew Weatherall. I love that Balearic music is totally genreless, and how it’s a feeling rather than a musical structure. It leads to this funny sort of jingoism amongst Balearic fans, who claim loving ownership over unsuspecting artists’ music, which reminds me of how some of the older Belfast generation where I’m from, often affectionately claim that famous people from around the world are Irish, even when they’re not.

Cam: We decided to keep the mix fun to capture that spring mood, but there’s a point toward the second half where we momentarily delved a bit heavier and I span this random release I found on a Bandcamp compilation, by a Mexican label called Disque Discos. The track is by TYU, it’s entitled Dub Africa and it’s heavyweight. Driving proto kicks, semi-haunting chants, rolling top end…pure fire in my eyes, I gave it a run out at Pickle Factory recently and it went down a storm. If you agree, go show some support on Bandcamp :-) There’s also an as yet to be released record from our friend Hysteric that we absolutely love.

How do you go about digging for music? Any tips?

Fergus: One tip I’ve adopted is to never have a dead record on the shelf. Maybe it’s an immature reaction against my mum’s serial hoarding (sorry mum), but I’ll trade in music that stops appealing to me just to get something exciting in my bag. As Marie Kondo says, “choose joy!” An added bonus is that store credit feels like free money, so you can get that £40 single-sided 12” you desperately ‘need’ without grinding your teeth into dust.

Cam: Get the little voice inside your head saying ‘you never know’ haha. I think some of my favourite records have come from Charity shops and shops that from the outside don’t look like they’d have the type of music we listen to. My favourite find ever was a shop in London that sold reggae records: I went in and saw Global Guidance (insane record) lurking at the back, so I asked the shop owner if he had more like it. Before you know it, I was guided to his loft where he kept 6 crates of sweet sweet 90s UK, Italo and Chicago House from someone’s private collection he’d bought. Better yet, now he keeps me posted when he buys new ones. My next mission is to conquer his dub section.

Can you tell us about the parties you’ve been running at The Cause?

Sure. For those who haven’t heard of it, The Cause is part of a growing scene of DIY club spaces springing up in Tottenham. It takes lineup risks, finds that balance between a safe and free atmosphere and fosters a loyal and diverse following. Stu Glen, the club’s co-founder, is a bit like a Del Boy version of Olaf Boswijk from Trouw. He puts the party and the people first, trusting in local talent and presenting it with exciting opportunities to play alongside more recognisable names. We’re really just a product of his approach and goodwill.

The concept behind our parties there is essentially to follow Stu and his team’s philosophy and it has paid off. Like The Cause, we involve local DJs and their respective crews as much as we can, and it’s helped us make some great new friends, understand the scene in London a bit better and has led to larger scale, more diverse and more fun parties than we could have ever imagined. We try to keep our friends excited about the parties, since seeing them holding it down on the dancefloor or slagging us off for a botched mix is the force that makes it all worth it. It’s an added bonus to have the platform bring bigger name DJs in for the ride, and to get the music on point and the people excited.

What have been some of your most memorable and standout moments since you began throwing parties?

Fergus: Hosting Roman K for his first UK date was a belter, as the dude’s Jeff Mills on the decks and one of the most humble and cool guys we’ve ever met. He’s a resident at Closer in Kiev, who we came across through stalking old Secretsundaze posts online. They talked about playing this mega back-to-back with Roman in Ukraine and we went down this Roman K wormhole, finding Youtube videos of him playing to these adoring crowds and his incredible mixes from Strichka Festival. Closer has this outdoor terrace where Roman often holds it down in the early hours of the morning, and so we thought we would try and recreate that by doing our first ever day party outside The Cause.

When Roman agreed to play, we arranged a reunion by booking Secretsundaze to play with him, and when they gave the nod, it was the beginning of a dream lineup for us, as huge fans of them too. It was the hardest we’ve ever worked for a party and it had so much scope for error, with rain forecast, rising costs and visas to get in place just around the time Womad fell apart. Spare pants seemed essential, but we had the dream team at The Cause to help and we reached out to a load of incredible local talent and promoters like Coe, Dylan First, Tim Hinson, Rhythm Sister, DJ Dreamboat, T. Margos, Will Lister and our pals and long-time collaborators at Studio.7a — their music, help and advice made the party fly.

Roman K and James Priestley killed it in the sunshine, which felt like a far-fetched goal come to life, and my mum even congratulated us on pulling off such a “fantastic collaboration with a foreign DEE-JAY”. The party had life after it ended, with the live recording of Roman and James becoming one of our Soundcloud’s strongest mixes and the event eventually led to us playing at Secretsundaze & Friends, our first ever ‘serious’ booking and the most fun slot we’ve played to date. I’ll stop gushing now, but the whole thing was a massive trip, which ended pleasantly with Roman K enjoying his first sausage roll.

Cam: Carista. We could probably just leave it at that to be honest, but if you haven’t experienced her yet, go now and enjoy. Ferg had been raving about Carista for a while — I kept getting these weird voice notes he makes for about a year and a half saying “Mate, Carista is bad ass”, any time we discussed line-ups. Through some wizardry on his part and the universe aligning we managed to book her to play room 2 for us on the same night as Jamie Tiller and Tornado Wallace, with the Studio.7a boys hosting her. This was just after her Boiler Room set at Dekmantel and a bit of dream line-up for us, so there was a buzz in the air that didn’t run out until she was back in the cab leaving the party and us suitably star-struck. The vibe she brought was electric and she threw it down so hard. It was an energy we’ve never seen the likes of in room 2 of The Cause and it’s a testament to how explosive her rise has been. Big up.

Are you worried about the UK leaving the EU and how it might affect the party scene?

In a word, yes. To borrow from England’s resident stomach-churner, Jacob Rees-Mogg, father of Sixtus Dominic Boniface Christopher Rees-Mogg, we are classic millennial “Remainiacs” and we still haven’t quite accepted that Britain is set to leave the EU. It’s impossible to predict what the ramifications for the party scene will be, but we recommend listening to the RA Exchange podcast from 1 April with Gabriel Szatan, Rosie Morris and Mira Calix for a good overview of some of the issues it may face. The People’s Vote March on March 23rd was proof that dance music has a voice, which we hope will force politicians to be pragmatic if compromise and changes are needed to keep the scene healthy. At the very least, we hope Brexit means breakfast, like many politicians have promised.

Tokyo Fantasy is brought to you by Jack, Cam and Fergus. Check them out over on their Soundcloud at soundcloud.com/tokyofantasy